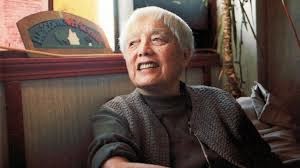 This is a re-post from PBS's POV Blog.

“Why are we afraid to talk to one another?”

This question set the tone for a recent dialogue at the Malcom X and Dr. Betty Shabazz Center in NYC, which followed a screening of Grace Lee’s film American Revolutionary: The Evolution of Grace Lee Boggs. According to Active Voice program coordinator Micael Bogar who helped organize the event, “At that moment you could almost feel something in the room tighten, then lift, as attendees began to talk about the challenges that arise when conversation turns to tough issues like race, inequality, and revolution. People often worry about disagreement or possibly offending someone. But just getting that question out in the open really helped to create a safe space to go deeper.“ As Bogar puts it, “Grace’s life is an example that really sets the tone for that.”

The NYC event was part of a trio of pilots led by Active Voice and inspired by the World Café dialogue model. The idea came about when Grace Lee and her producing partner Caroline Libresco came to us wondering how we could effectively leverage the film’s power for impact. Lee and Libresco knew that the impact potential of the film did not lie in the number of people it could draw to a theatre. Rather, true to the philosophy of Grace Lee Boggs, they were intrigued by the nature of conversations that took place after screenings of the film. As we brainstormed about how to harness that energy in a meaningful way, we developed our goal for the film’s campaign: Use the film’s convening power to bring together diverse activists and prompt cross-issue organizing around specific, localized social change goals.

To test this idea, we conducted a series of pilot screenings—in New York, Chicago, and Oakland—in partnership with local social justice organizations. I had the opportunity to attend our first event in Oakland, and admittedly, I wasn’t sure whether we would be able to spark something meaningful beyond a few good conversations. But when the lights went up after that screening, everyone in the room leaned in as we started our World Café-inspired dialogues.  After three rounds of dialogue with dozens of people, we all walked away with a better sense of our collective priorities—building community, furthering dialogue, advancing economic justice—and, moreover, a renewed sense of collective willingness to change things together.

Of course, this event was just the beginning of something bigger. Our evaluation revealed that using the film to attract diverse activists and then undergoing carefully structured post-screening dialogue was indeed a powerful vehicle for inviting connection across issues, inspiring and rejuvenating attendees in their activism, and generating creative ideas. But how can you measure the value or impact of having your ideas challenged in a way that honors and respects where you’re coming from? How do you calculate the impact that has on your life and what you carry forth into the next conversations and interactions you have? If Grace Lee Boggs’ commitment to revolution over the past 70 years teaches us anything, it is that the deepest transformations—of self and of society—take time.
Check out Active Voice’s toolkit for a successful World Café-inspired dialogue around American Revolutionary: The Evolution of Grace Lee Boggs, available here. If you’d like to organize a free screening in your community, register in the POV Community Network.