Internet Blackouts, The Republican Primaries, & The Power of Silence 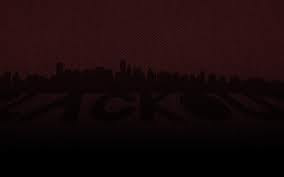 By Pia Infante
I've been thinking about the power of silence.
The successful, wide-spread website blackout and viral organizing of the past week to protest the SOPA bill in the U.S. House of Representatives and PIPA bill in the Senate sends a loud message. These bills have drawn the ire of many in the tech industry and beyond, citing that the legislation parameters proposed are "too broad" and will "threaten free speech, stifle innovation and most likely will not even effectively eliminate piracy."
Tracking the phenomenon, the NY Times reports that "by Wednesday morning, several lawmakers had reconsidered their support of the bills — one in the House, one in the Senate." And not just a handful of lawmakers changed sides after millions expressed their opposition online. In a graphic illustration, Mark Fraunfelder shows that 15 lawmakers abandoned their support for the bills while 70 lawmakers suddenly went public with their opposition. 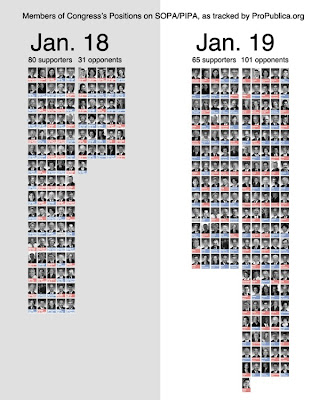 In fact, CBS news reported in the last hour that "Senate and House leaders announced Friday they are postponing work on two controversial anti-piracy bills in the wake of large online protests that spurred several congressmen to rethink the legislation." This unfolding series of events hearten the wary dreamer in me -perhaps the promise that technology can increase public influence on how our democracy is governed is one that we can continue to live into.
The Republican presidential nomination circus, most recently taking place in the U.S. South, has also brought up for me the power of silence. I can't help but experience the vociferous voices of the potential nominees as a cacophony of blustery promises, threats, personal attacks, 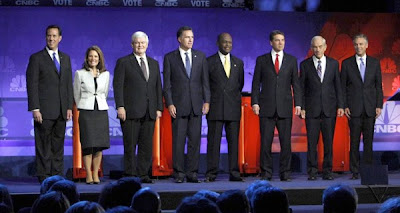 and shameless self promotion. Now, I will own that I'm biased, en general, against the two party system - I'm not certain that it allows candidates who are truly in the game to help everyday people any real chance at the White House. In fact, the same kind of highly publicized drama on the Democratic stage might also sound much the same to me. In any case, when I do follow along I find that muting helps me observe the energy, body language, and messages of the candidates. I wonder how silence might serve any one of them.
I don't know that silence without a strategy could benefit anyone, but the power of ceasing normal activity or simply refraining from joining the fray cannot be under estimated. In high school debate, I remember the coach reminding us that we didn't have to fill up our allotted 3 minutes with words. She suggested that a thoughtful pause could enhance our point quite effectively. In my own life, I am attempting to invite silence into my daily practice - to remember that silence can invite others or innovation in or prompt the unnecessary thoughts and worries to take their leave of my mind. I also listen better, and hear more when I'm not putting anything into the space, which elicits untold gems of insight.
The website blackouts of the past week, with major industry giants like Wikipedia leading the way, were to me an indication of how thoughtful the strategy of silence can be. And how effective.
Posted by The Whitman Institute at 10:05 AM